Is the team too big now? 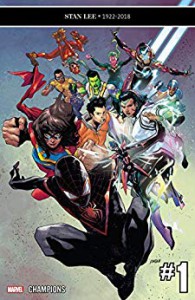 I think it may be: there are three teams, and even X-Men only had two before they decided they needed two books, one per team.   Given the Champions have smaller teams, and thus a somewhat smaller rooster, but this feels ambitious for one book.   Overly ambitious.

Even in the first issue, there wasn't enough to time to familiarize readers with who was who, and I felt a little loss, thus the lack of one star.

I think I preferred the other artists, but this art was good enough that it didn't warrant even a half star off.   It just doesn't seem quite as dynamic as the previous artists, but I'm hopeful that once the artists gets the hang of the series, the art will become at least as pleasing to me as the previous artist.  (Not all, but some artists do take an issue or two for the full brilliance to set in, if not a little longer.   Fair enough, so I'm holding out hope.   Or maybe I'm just being overly picky because I loved the last series so much.)

Anyway, the little that you did see of Viv has her exploring her sexuality, in a continuation from the last issue of last series.   She's not into boys, but she thinks she might be into girls: one girl on the Champions in particular.

Riri, however, doesn't feel the same and can't quite deal with the fact that she's friendly with Viv, Viv kissed her, and she feels exploited because Viv didn't ask.   Viv, meanwhile, does't understand personal space, or sexuality, or consent the way that Riri, or the humans around her do.   Viv believes that she stopped when asked, and thus everything is normal.   Riri is not sure what to think.   I'm not sure if this is a clunky introduction into the 'Riri is a lesbian/bisexual/into girls and we're not labelling it yet' storyline, or a really clunky consent storyline where you understand or else it's 'robot logic' type thing.   (I'm not sure how I feel about this: Viv did respect the boundaries when she knew what they were, she asks when she's told to ask, and is genuinely confused about what she's doing wrong.  I'm also concerned about just how clunky Zub's super PC storylines are.)

In general I agree: stop when asked, I'm not sure if Viv is being vilified or what, but the whole unsure of it thing seems clunky as well.   When Zub gets super into social issues, like he did in the annual, his storytelling has gotten super, super clunky.  It's not that I don't agree with him, but I'm more like 'ugh, this is so heavy handed'.   I really dislike Viv being used this way, although I've been looking forward to her exploring where she lands, and how she feels about her own sexuality and even gender.

But Zub is just doing ti wrong in my opinion.   That being said, i strongly object to this, but it was only one small part of the story.  I like the other parts, especially where this ending is leading...