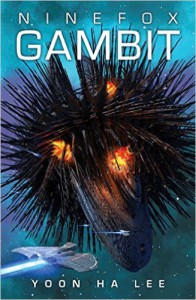 So I think that the lazy/sloppy world building reviews kept me from finishing this.   I thought they were rational and well thought out arguments, and they make me think about how I approach and read books.  And how others will approach them differently.

Because you know what?  I don't get so much of this book.  Like a lot of this.  This book makes me feel like a big 'ol dum-dum, and so do some of the reviews where I am like 'you clearly understood something I didn't.'   I frown-y face at myself so much for being dumb enough not to really get so much of this book.   I actually am not sure I disagree with the reviews, although I have a different take on the world building: I think that things, like how the calendars work and influence the fighting, and the math of it all, were left vague on purpose, and for two different reasons.

The first is twofold in fact: the math it would take to come up with the way the calendars actually worked, and implement them, seems to be, I dunno, so much work it would make me want to curl up in a corner and weep.   More than that, if that much math is involved in such a complicated calendar, do you really want to read that?  I mean, I'm sure many math-oriented people would geek over it, but I personally didn't want to read that much math, thank you very much!  I think Lee realized that nine-tenths of this book would be 'and this how the calendrical fighting system worked' if he were to properly explain it.   (And I probably still wouldn't get it, and I would feel like the largest dum-dum ever, so thank you, Lee, for not letting my ego take that blow!)

Secondly, I don't think it's that important.   So did it bother me at first?   Yup.  And even when I saw those reviews, I tried to read it and was like, nope, don't get it, and got frustrated.  I figured with those reviews, why bother?   But when I started reading Raven Stratagem for the Hugo voting, I realized I kind of needed the backstory, and hey, I owned a signed copy!   (A signed copy that came with me to rides on Universal Studios, FL, by the way.)

So I grit my teeth, started reading, and I just let go of needing to understand.   Once I realized the world, or part of it, was incomprehensible, I allowed myself to appreciate the nuance of the political system, those who rebelled against it, and the characters' interplay and growth.

Of course, this book has loads of the kinds of angst and mind-fuckery that I just love, so it filled a hole in my soul.  And I even sent the author a note saying that after the shitshow of a wedding and my grandfather's passing that these books kept me trucking.

He sent me back a lovely e-mail that said he was glad they brought me comfort.  I own this as an e-book - and an audiobook.  I'm probably going to listen to the audiobook soon and may invest in the second and third, if I can get over Jedao's voice.   The problem with audiobooks is that often times the characters voices don't match the voices in my head, and I listened to a bit of Ninefox Gambit earlier tonight.   Jedao's voice might kill this trilogy as audiobooks for me, to be honest.