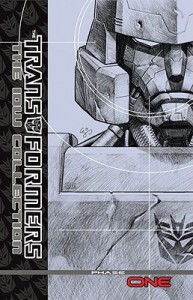 This collection has a phase two, starting with the sister series More Than Meets the Eye (MTMtE) and Robots in Disguise (RiD).   It also had series like Till All Are One, the Windblade series - the miniseries and short series that was supposed to be an ongoing from what I understand - and some non-cannon GI Joe vs. Transformers.   Before that, there was the Spotlight series that didn't seem to have a set schedule to me - I may be wrong on this - and was mostly mini-series like Infiltration, etc.   This collection also isn't in straight chronological or publishing order; it's IDW professionals and fans getting together and deciding on the best reading order, so one Spotlight, I believe, mentions a mini-series that is in a book further down the line.   It's not necessarily the best reading order, they admit, but the best they all came up with when they hashed out what should come first.

It's actually well put together.  I really enjoyed Shockwave's Spotlight in particular, as it involved the origin of the Dinobots - once the Dynobots - in this continuity.   It's also well written, and I remember the ending well; it surprised me enough the first time I read it - years ago - that I've never forgotten.

The problem isn't so such that these are bad.   They're certainly not the worst Transformers stories I've read - The HAPPY BIRTHDAY, MEGATRON fanfiction probably takes that cake* - and I thought these were the shit when I first read them.   Who could outdo Simon Furman writing Transformers comics?   Then I read truly outstanding series - the second phase in this continuity - and realized just how much went wrong with these comics.

I prefer my Transformers comics to take place on Cybertron, or at the very least focus on them instead of sharing a focus with the humans.   If not that, please don't make the humans as insufferable as Verity - who I hated even when I loved this comics - or Jimmy or Hunter are.   Please?

There are a bunch of Spotlights - stories that focus on one character - and then the Infiltration mini-series in this.   I've been reading how these seeded a lot of Barber's and Roberts' stories in phase two, so my main reason to blow through these is to catch all that before the universe explodes, or implodes, or whatever - goes away starting in July.   Sad, sad days ahead!

The Spotlights were hit or miss: Hot Rod I didn't enjoy so much, Cliffjumper's story made more sense and was more emotional for me when I first read it, and Blurr's was the second strongest after Shockwave's for me.   Blurr's story still wasn't as emotive as anything in phase two, so I'm really cringing when I read a bunch of this.

The art is also not nearly as good as the phase two art.   Again, it's not bad, it just pales in comparison.   And that's where phase one really hurts: it's simply not as good as what comes later.   I can see how Ore-13 - which Shockwave planted in his Spotlight and comes to play in Infiltration - will come into play.  It hurts seeing Sunstreaker knowing what's going to come.   You read these and realize why Starscream shouldn't lead Cybertron.   So most of my joy comes from putting this together with what comes much, much later.

Still, the plan is to read as much as I can before Unicron hits.   Let's see how that works, shall we?

*worth looking up if only for the laughs.   I highly suspect some trolling fanfiction here, but I don't care; it cheers me up with laughter when I'm feeling down.   Has in the past, too.