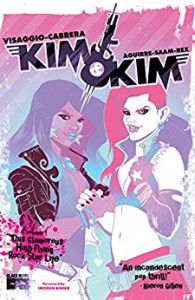 So, let's get this straight: The Fighting Kims are made up of two Kims, one the trans daughter of a bounty hunter - who insists on calling her 'him' and referring to her as 'his son' - and the other her mostly platonic significant other.   The two Kims love each other, and they make a perfect pair - even though the most sexual thing about them is holding hands or friendly kisses on cheeks.   They're pretty much an asexual couple as far as I can tell.

And the sci-fi trappings are fun.   Robot gorillas, bounty hunters, shape shifters - the fantasy magic aspect - and alien worlds and spaceships.   But the most touching things, the most cutting details, are all about human experience.   So let's get the general - and generally said - things about this graphic novel out the way.   It's kick ass, it stars two women struggling to find their way in the world but who are both incredibly strong - physically, emotionally, and mentally - and it's got a lot of trans/LBGTQI+ positive messages.

The way that Kim Quatro's father, Furious, keeps her image as a small boy on his phone and refuses to call her by her proper gender is telling.   It's also something I suspect many trans people deal with, and that causes pain and conflict for them: Furious loves his child, but refuses to accept their true gender.   Furious continues to try and interfere in Kim's life, sending her help, calling her, but she's angry enough at him to cut him off completely.

It's also telling, I think, that Furious never corrects others, like Saar, who is Kim's former partner.   (Bounty hunting partner.)   Saar may believe that Kim should take her father's offers, but Saar also respects the fact that she is trans, and calls her by her proper gender - and name - in front of her father.   He never corrects Saar, so I think there's some inner conflict in Furious as well.

Still, it's horrible to see, for both Kim and, to be frank, Furious.   (We see him from Kim's point of view, and get her reaction to him.   So far, he hasn't done anything so horrible that I think of him as evil, just misguided, just stubborn and unwilling to accept Kim as she is.   That is, I can still see how much he wants to see Kim safe, even though he's unwilling to admit how much his reaction to her being trans hurts her.)  It's painful for both of them, and I feel for both of them.   (More for Kim, to be sure, but I felt poorly for Furious during a couple points in this volume.  I don't think I was necessarily supposed to, but... I did.)

Regardless, this had action, humor, and two women who couldn't get their shit together.   They used 'like' a lot - which I do sometimes, too - and they just can't get a proper job that will keep them secure.   I know how overwhelming a normal life can be, how confounded I am at fitting into that world, and I almost wept with relief seeing this confusion out there on the page.   Finally, someone who was enough like me - and yet fun and successful on some level - that I felt a great catharsis.   (Not enough to make it's way through my current self-deprecating state since I'm trying to figure my shit out and I'm getting closer, but still.)

Love, love, love.  I will keep up with these artists and series.