I question so many of the writing choices... 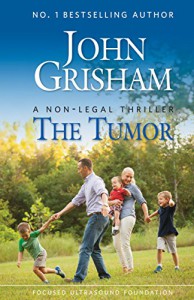 This was told like it was a fiction story so I was like, 'oh, a fiction story to make a point about medical progress.  Let's see how this.... OH PRIMUS NO WHY WITH THE MEDICAL DIAGRAMS!'   Because that didn't make things boring for me in the middle of a supposedly fictional story.   Totally didn't break the flow.   Nor it make me want to scratch my eyes out.  I don't look at brains for a reason.   (Oh, right, spoilers, darling.   The tumor is in the brain.)

If I had known that there would be that many diagrams of gross, squishy insides, or so many breaks to preach at me about the medical need for this technology, then I wouldn't have picked this up.   But there we go!

The same is that Grisham made me annoyed with his writing style, but this was a truly important message.   It was half fiction, half medical pamphlet, and sad to say, the pamphlet half was more interesting.   The story lost me, mostly by interrupting to say stuff or show me gross stuff - brains, with or without tumors - but the stories at the end that were real life examples about how this ultrasound technology helped people were fascinating.   The fact that ultrasound is potentially a better treatment of cancer is fascinating.   (Grisham makes it clear that his friend is in support of this, and asked for his help, which is why he wrote this.   He also makes it clear that in the case of a terminal diagnoses, this treatment wouldn't cure the patient completely but would give them more quality of life for a much longer time.)   When he sticks to the facts, I couldn't get enough: I wanted to know more about this technology and how it could help.

That being said, I wouldn't trust a fiction writer with my medical decisions.   I did research.   The FDA said nay.   A lot of cautions are being given about the side effects.   A lot of things seemed to be glossed over in the book.   So is this the right treatment?   I don't know.   I do know I didn't think about it, hell I didn't even know about this option, until I read this book.

All the stars are taken off for a what a sloppy, slapped together mess this is.   It's not merely one half because I think it's worth knowing about high intensity focused ultrasound therapy as an option and a treatment into cancer - as well as other maladies - that is being researched around the world.