Not that into this 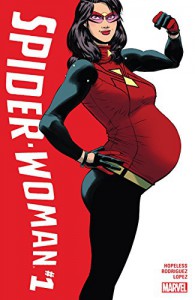 It had a bunch of one-liners, but I just wasn't feeling this.  Other than superhero mama, this didn't feel like it was going anywhere, and I'm not into the whole pregnancy thing.    There's nothing wrong with this: it was funny and hip.

It just wasn't my jam.  I enjoyed the art, I laughed out loud, but neither the character nor this storyline called out to me personally.  I wouldn't be surprised if this had a long, lauded run.   It's actually beyond 'nothing wrong.'   It was actually something I would be all over in another storyline - one that didn't revolve around the heroine sitting at home on maternity leave.

The Mary Sue type connections to everyone annoyed me, too, probably because I don't like this storyline.   Still, Vision.  In the corner of one page. 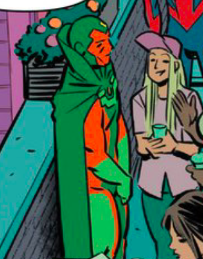 So that was a nice thing for me.   Still, I can't see myself continuing with this one.  I just was out shopping with my parents and didn't have access to internet except right outside of Loews - because free wi-fi extends outside the store and I was in the car.  (I did get the beads I need to keep on trucking with the Deadpool gloves I'm so, so behind on at this point, so yay!   I don't like reading two issues of one series - like Scarlet Witch - because I'd rather not mess up on screen caps when I get home and do that, because I'd end up with the wrong pictures in the wrong issues, so I took a SW break for S-W.