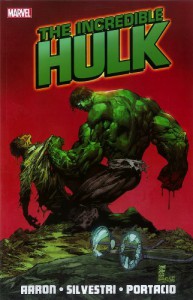 Bruce Banner and the Hulk have been split, with the surgical precision needed to keep them separate.   Except Bruce is slowly going mad, making an army of beast - or Hulk - men and trying to get his angrier half back.

He simply can't cope without having The Hulk as part of him.

And The Hulk doesn't want to go back.   He wants to live in peace, and yes, he is at peace without Banner chaining him to Banner's past, his obsession, his neurotic ticks... to everything that made up Banner.

Oh, fuck, I'm way too drunk to write this eloquently.   (Pumpkin beer.   Vanilla ice cream.   So good.   So tempting.    So making me sleepy and less eloquent.)   Let's just leave it at this was a lovely, fucked up horror story: MArvel's take on the Island of Dr. Moreau.   It was chilling to see how Banner could be worse than The Hulk left to his own devices, a twisted what if that came to pass.

And I loved it.  Lush art, great writing, but I also felt it was a bit slow at the end.   So four stars.