It's the subplots that do it for me in this... 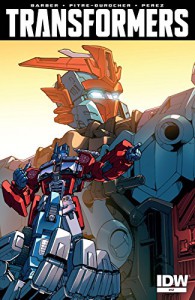 The main plot still centers around Earth and Blackrock and all that jazz.  More and more of the other plots, the subplots on Cybertron, are seeping in, and those interest me far more. The fissure between the Autobots and Decepticons - that isn't supposed to exist - deepens, even on Soundwave's refuge.   Plots that have been seeded before this issue - Cosmos and Soundwave's rickety understanding, Needlenose being pushed over the edge by the death of the Decepticon Horri-bull - start to come to fruition here.   They haven't been played out yet, but it's all starting to take shape.

I like where this is going, and I hope that it all culminates on Cybertron, getting all the Cybertronians off Earth.    I realize this might not be the case, but even veering more towards Cybertron based storylines is enough for me.

I haven't been that happy with the way things were going.   Star ratings, and reviews, have reflected this: I find the Cybertronian aspects more interesting.   Why have an alien culture if you don't focus on what's different?

This hasn't been happening.   The arguments between humans and Cybertronians were too much like human conflicts to show me much that was different.   I haven't been as excited about this series, even with Thundercracker and his dog, Buster, who amused me so much.   And while I wasn't happy with the turn of events, the characterizations remained as excellent as usual, and so the dip in stars reflected this too: fours, maybe threes, but not much below that.

It's wonderful to see this explore a little more of Cybertronian culture, to get back to Cybertron, and to see it rise back up to the five star status.   Here's hoping that it continues, although the next issue promises much more of Thundercracker and Buster - both on Earth.  Hopefully those two, however, will keep me entertained as they have a rather lovely relationship, and there might be more Cosmos and Soundwave, and that all bodes well.

Crossing fingers for a continuation of this vein, however.

And just as a belated, final note: I thought it wouldn't get more heartbreaking for Needlenose than when Horri-bull died.   Having to explain that it wasn't a mistake to love him to Tracks, his brother, was pretty awful.   And then what happened to Tracks?  Needlenose watched the Decepticon he loved, and his brother, killed in front of his eyes, one by the Autobots, and the other by Decepticons.   (Although they're still leading us along with Horri-bull's death: the Decepticons allowed him to die, and Needlenose doesn't know this yet.   I still wonder what will happen when he finds out.   For now, though, Horri-bull's death acts as a catalyst for him to join the Decepticons once more, and even get a little fanatical about it in the meantime.)