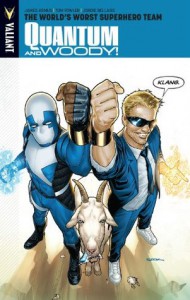 There's a goat.   That apparently hulks out.

Two brothers who lose their single father, only to find out that he'd been murdered.   When they try to figure out why, and how, they end up exploding his lab.   Not exactly awesome when you're father worked in a top secret lab, and that explosion gives them superpowers.   Oh, and they might die if they don't whack these bracelets they have together every, what, twenty four hours?

The character interaction is sparkling, hilarious, and this is gleefully un-PC.   Even when Eric tries to be PC, it manages to be subversive, and in a manner which lets you know that there is no sacred cow in the room.   (An angry, violent goat is definitely watching over your shoulder, however.)