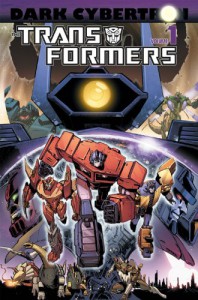 Since I know this is on Netgalley, I'm going to say this right here and right now: as much as I want more people to read this, I don't think it's a good idea to do so before reading, at the very least, More Than Meets the Eye issues 1-22, and Robots in Disguise issues 1-22 (five volumes of each series.)   Dark Prelude is one that that's a nice compliment to the two series, but it's not important enough that you have to read it.  Also, I did get this from Netgalley, but the computer was giving me a migraine so I read the physical copies.   I paid for those all, too, so I figure... yeah, I gladly pay for these.

The problem is the world is so complex, and there are so many in-jokes and running gags, and so much of the history of the characters and the world has been laid out in the ten volumes I mention that this is going to be all but meaningless to people who haven't read them.   Especially if they're not Transformers fans in general.   Still, the history between Shockwave and Soundwave, Soundwave's origins, certain enemies that show up, the Lost Light and the quest for the Knights of Cybertron?   All reinvented by the two series.   What's going on with Cyberton?   It hasn't happened in any other 'Verses.   Knowing what's what with the Matrix is important, and you don't if you don't read the ongoing series.

Orion Pax will confuse readers new to this.   This world is lush, and I imagine it would be frustrating reading Dark Cybertron without having all this background knowledge.

For those who are in the know, however, this is a treat!   Another five star review for my two favorite series.   Roberts and Barber weave as good a story together as they do on their own, and the themes, the jokes, the characterization that I adore is all there.   In fact, the only thing they did was ramp up the stakes and the death toll and the action, adding in the same twists that I'm used to in the series alone.

I honestly didn't see a lot of this coming, and I'm sitting here, wondering what else to write, just unable to come up with how much this moved me, or how amazing I found it.

Onto the first half of part two!