Still loving this all! 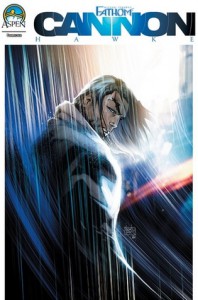 This goes back and explains more about Taras' soul being shoved into Cannon Hawke.   Vana, Taras' mother, planned on resurrecting her son through Cannon.   Her plan was to have Cannon aware, but unable to act; Taras would control Cannon's body and Cannon would be in a living hell, watching from his own eyes as his enemy took control of his body.   Instead, Taras was in Cannon's body, but there was a power struggle from within, as both Taras and Cannon were determined to control the body they both shared.

I'd known about this, and how it ended - but there were notes to check out this graphic novel to get the whole story.   I'm glad I finally did.   It gave more detail about not only the power struggle, but about Taras and his family.

It also goes more into how Cannon functions on land.   Or I should say, how he fits into the human world and what he does for the humans - and The Blue - when he's in the human world.   It's his interactions up here that give him an appreciation for the world above, as well as humans and their society and accomplishments, and it was nice seeing him living on land for a while.

The art didn't do it for me.   The art is okay, but but I'm still in Fathom's world as illustrated by Michael Turner, and no one else does it for me in this universe, at least not yet.