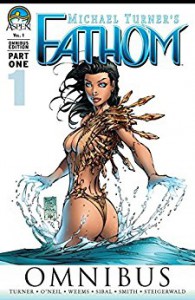 This topped six hundred pages as a PDF for Humble Bundle, although it's under 500 on Comixology, which is fairly accurate as far as page numbers go.  I've given up trying to figure that out and just used the PDF page count, so I could accurately note which page my notes were on in the end.

This starts with Michael Turner's work.   I've talked about the things I wasn't crazy about, like repeating a scene exactly three times with other people's thoughts on what happened.   The more I think about this, the more I dislike this, particularly in Fathom.   Which is actually a good thing: i cared enough about the world and world building that I felt the repetition took away from giving me more about the world.   The politics felt very real, the infighting, the splintering of groups without one people, and then came the added difficulties of dealing with two completely different cultures.   I also felt this started out with slightly more stilted dialogue, but when rereading Spawn, I felt the same way.   Todd McFarlane adjusted to writing his own series, and as he did so, he learned how to smooth things out as far as plot and dialogue went.   And he had a pretty steep learning curve, but so did Turner.   Turner quickly dropped the repetition of scenes, and his dialogue very quickly got a more natural feel that allowed myself to fully lose myself in his world.   I did notice a couple panels that felt off to me - but it was parts of panels, like some feet that stick out in my mind - and it was a quick distraction.   I cared too much about his world and too much about these characters to let that get in my way, and I brushed it off as someone dealing with not only double the duties.   Overall, I was impressed that he was handling two times the amount of work while keeping the quality of his art spectacular for the most part.   (Also, I can't remember who or when, but one artist was asked about the favorite issue he drew and he claimed all he saw was flaws so his favorite one was the issue with the least flaws at that point.)

I didn't even knock off a star for any of this, though.   I might have knocked down like a fourth, but was willing to keep it at five and briefly mention these flaws.   The real reason I knocked down a star was that I felt Koi Turnbull's art on the second series didn't match Turner's quality.   Which is a tough act to follow!   Turner was amazing, and despite the hypersexualization - especially of women - and the fact that I felt like all his women looked fairly similar as far as body type went, I'm always in awe seeing Turner's art.   It's no surprise, either, that he attracted some of the best inkers and colorists to work for him: the colors sparkle on the covers (bright colors to attract customers passing by, I assume) while they either remain so or turn muted inside in order to match the tone of the scene they're working on.  (And the lighting situation, of course, given that so much of this takes place under water.)   So, really, who could they get to replace Turner for me?   Hard call, especially as I'm reading this after his passing, so probably got overly defensive.   Turnbull isn't a bad artist, and as with Turner most of his art was spectacular.   I did prefer Turner's style, while appreciating the stylization that Turnbull choose to use.   (Turner's art is more realistic, if you think every woman in the world is a super skinny supermodel and every dude is buff with ten packs, but that's pretty standard for a lot of comics, especially when Fathom was being originally published.   Which I actually appreciate that there are half-naked dudes parading all around.   Not my thing, but for readers who are into that thing?   It was nice to see Turner give them a little Chippendale along with the Hooters, especially since female readership is something that's still growing and so it wasn't quite as common to see this much naked male booty in comics when Fathom was originally being published.   Points there.)  Unfortunately, Turnbull not only was coming to bat after Turner, I felt like his flaws were slightly more glaring.   Instead of feet, it was a really weird angle while kissing.

Fortunately, the writer tasked with series two made me continue to love the series.   More intrigue, more of a war between the Blue and the humans.   I was worried in the first couple of issues, but was won over soon enough.  I do feel like the first couple of issues were a little too scattered, and could have been one issue, but it quickly pulled together.   Another steep learning curve, and I love what happened between the factions, as well as the revelations about Finn, and even what I suspect is going to happen with Kiani.

I've never really gotten into Fathom, or the Aspen universe.  I was worried because I feel like the tones of comics - the way women are objectified, or treated badly - has changed so much.   I knew what Turner's art was like, particularly his women, and while I was bothered by how skinny they were - but, organs, she needs a place for her organs - and what it meant that this was the idealization of women, I couldn't help but admire how obviously talented Turner was.   And I didn't remember until I read this, but I vaguely recall him mentioning the men being all sexy, too, so look something for people who want that!   My main concern was the way women are written: infantilized, sexualized when spoken to, and weak when it was time for the menfolk to ride in and take charge.   I couldn't help but buy the Humble Bundle.   I really, really wanted that Harley pink variant! That much Turner/Aspen work for fifteen and up?   (Well, one and up, but I needed to spent fifteen for the bundle, and some extra on S&H for the Harley variant.   Worth it!)   And wow, Turner may draw idealized versions of women, but he writes them as strong.   It's not just lip service, saying that Aspen adjusts quickly.   She does.   And while she's convinced to join up in things she doesn't believe, she allows Kyla's kindness to reminder her who she is, and she questions herself when things feel wrong.  In the end, she follows her own conscience and no one else's.   She's also a superpower, and everyone needs, or wants, her to protect them instead of the other way around.   (When a man tells her to get behind him, she gives him a really?  Sheepishly, he points out it's just habit.   Aspen might need help at times, but usually she's perfectly able to take care of herself.   Cannon, who has more training - and is male - also needs help at points although he's usually able to take care of himself.   It's pretty evenly balanced, I thought.)

I was going through a bad period: anxiety, depression, exhaustion.   I wasn't fully engaging with everything and I literally feel like a different person since picking this up.  I'm more enthusiastic, I'm less anxious and depressed, and I have more energy.   I'm able to engage more with reading - as in not putting something down midway if this is any indication - as well as engage more with the world.   Not to say that this book is a cure, but just to say that I needed something new, something that would make me think, but also be fun.   This book was just the right thing at the right time, and that was pretty awesome.

I basically feel like I got my moneys worth in this Humble Bundle after reading this book.   And I will devour omnibus two - as soon as I finish ODY-C volumes one and two.   (I, ah, kinda feel like I promised Christian Ward that on Twitter, even though I just said 'probably.'   Not that I'm deluding myself into thinking he's waiting for my tweet about how I found them, but I'm hoping I can tell him how awesome it is since I love Black Bolt and his art there, and he's been super awesome to me on Twitter.   But, yeah, after that?   I'm going to demolish this list from Humble Bundle because I'm loving the Aspen-verse right now.)