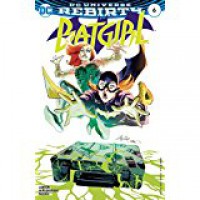 The story was fun: extinct plant that evolved to fight off dinosaurs run rampant on a plane, almost taking it down and killing all the passengers.   Of course, Poison Ivy is on the plane, transporting the last living specimen of this plant.   A specimen that was dormant until the combination of altitude and turbulence wakes it, or so she guesses.

I can see her calming down all the passengers, even if only to keep the plants from harm.   (Panicked passengers in that kind of containment could cause her baby some kind of harm, after all, especially if they all panic at the same time and form as much of a mob as they can.)

I can't see Ivy allowing Babs to take down the plant, much less helping her, though, even with all the talk about her hubris in bringing it along, her apparent concern for the humans so long as they don't touch her baby, and her eventual help in saving the humans at the cost of the plant.

Overall, I felt she was highly mischaracterized, and so I won't be continuing with this series.