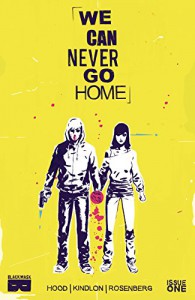 I got this in a set with exclusive variant covers.   That means that it's not this cover; just in case someone should read this, I didn't want to confuse them with the Newbury exclusive cover.  I also got this box based on the strength of one title: Kim and Kim.   I enjoyed that so much that I ended up buying this box on sale at Newbury.

This didn't disappoint.   Popular Madeline and all-but invisible Duncan come together when he looks into her boyfriend's car to see her making out with him.  She sees, doesn't say anything, but calls him out for being creepy after her boyfriend tries to beat on Duncan.   What happens, however, is that Maddie shows off her powers: she gets super strong and her skin gets super hard, and her eyes glow.   Duncan vows not to say anything because he has a power of his own: he can kill people with his will.   He knows, because he's killed his mother.   At first it seems like this will be the typical popular girl/invisible boy romance - y'know, with superpowers and deep, dark secrets.   Instead, Maddie and Duncan get closer and closer until, after a gift, Maddie goes to Duncan's home.  What she sees, and what she does, means they can never go home again - or so Duncan claims.  In fact, he convinces her of this fact.   (And I'm pretty sure he's right on this one.)

I'm going to check out Comixology and see what's what with this series: if I can get more, I will.