Things get more and more fragmented even as they come together 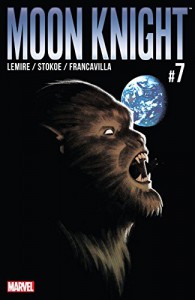 Realities collide and slip apart, making Marc/Steven/Jake less and less sure of their own mental health and what is and isn't real.   Events happen and then seem to be erased.   Both the characters and the readers are left afloat: what's happening?   What will happen?   Is this Khonshu's doing or Anubis'?   Because, yes, let's not forget Khonshu's attempted coup of Marc's very body or how he attempted to drown Marc's city in sand.

Even as Marc tries to cope with a tragedy that might not have happened, and what it means for his own mental state, reality, the world, he's confronted with yet another tragedy compounded by questions of his guilt in the matter.   It doesn't help that he wasn't sure if he was responsible for the tragedy that sent him stumbling into the next horror, either.

No, things aren't going well for Marc, for Steven or for Jake at all.   And yet, I can't help but feel he's fighting.   Even if he's barely got his head above water, he's not giving in.   He doesn't know what's happening and therefore can't come up with a solution, but he seems determined to make sense of his surroundings and I feel his strength.

Given the past issue's focus on the stigma of mental health and not being well, and given my own observations that sometimes just getting through a day is the most courageous thing I can do when it all feels hopeless, I can't help but feel inordinately proud of Marc here.   It's far from a normal day.   It's a traumatizing day.   The most courageous thing he can do is muddle through it as best he can - and he is.  It feels like he's treading water, and yet, I'm touched by his struggle, and I'm proud of him simply for taking yet another step forward.

As someone who struggles with depression, with what feels like massive distortions of reality when things aren't that bad but seem to be horribly crushing, irreversible, and hopeless, this series, this issue in particular, touched me.   It struck a chord, and it's something relatable to me on an extremely deep level.   Maybe I'm reading too much into this, but it feels very acutely aware of how reality can be distorted, and how it can affect someone's view of the world.

If I could, I'd this author a beer and sit down and thank him for this one particular issue.   I don't know why the previous one, which was more straightforward didn't touch me, but I suspect it was because it was in my face.   That can't tap into the way these distortions seep under your skin and hide; they aren't on the surface of things.   Neither was this, and it felt more authentic for that.   That's my guess as to why this issue meant so much to me.