I never know what to expect 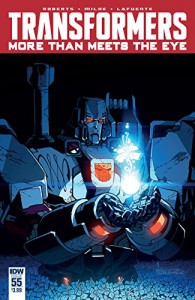 Especially now that Megatron is co-captian of The Lost Light.    What's going to happen?   No clue, none at all.   But that's what I've always loved about this series.

I'm less fond of Roberts killing off beloved characters, no matter how much it makes sense.   This death felt like it bordered on being a reason to motivate Megatron into action, but it was also called for within the story that Roberts had set: how could it end any other way?

And Megatron very likely would have acted in a similar way in the end, and instead this showed him having a hissy fit.   I feel like this has all been a very slow, inevitable burn towards this outcome - but who knows?   Maybe that character motivated more change that I expected, and I just haven't seen it yet.   Actually nix that: I'm sure that's the case.   This is, after all, Roberts.  He always is ten steps ahead, much like Megatron himself.   He's going somewhere with this.   And if the past is any indication, that character will come back.

Somehow, even knowing this is almost certainly the case, I still manage to mourn the characters, hard.

Oh, Roberts, look what you've done to me!  I'm a weeping, horrible mess.  I'm messy crying, hard.   And I read this yesterday and just got to the review.  Well, I'm not messy crying yet - but I will later today.

I want that character back!