This was so wrong! 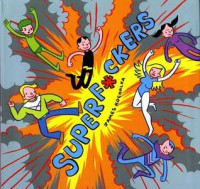 And it was funny because it was that wrong.   The plotline kind of meandered; it was more short strips about some funny thing that happened than a story anyway.   It all felt like it built up to a world, a small world that was seemingly inhabited by this group of superheroes with nary a civilian to be saved or a world-shattering event that needed to be stopped.  Instead, you get to watch these people swear up a storm, vie for power, try to navigate relationships which they tend to really suck at, and just insult one another.

It's bright and garish, but that fits that tone this sets: all show, no real substance to these characters of their world.   But therein lies the brilliance of this: it kinda feels more real than some superheroes.   These are what real life slobs would be doing with superpowers, and it speaks to all our worse halves, inviting us to mock them and laugh at them.

Hated the panels that were sideways or upside down   Or whole pages, even.   But other than that, love.   If you don't want to see comic penises, however, don't.   The pinups were unnecessary, all of men (made funnier by how much the guys called each other gay because showing a girl would be totally gay, I guess), but also served to highlight how shallow these characters were.

I'd read more of this!