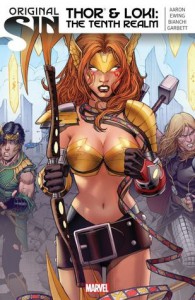 Angela is one of my new favorite characters, although that may be at least partly because of Serah.   Serah is so amazing, and she loves, and is loved by, Angela.   Perhaps more importantly, they work so well together, and against each other, that I can't help but love them for their interaction.

Serah is not in this book.   Loki and Thor, are, however, and the mythology of angels is expanded in this book.  I find angels in the Marvel universe to be quite interesting: capitalist to the point of treachery, their motto is 'nothing for nothing.'   Which really translates to make sure you'll get paid before you do anything for anyone.

They not only betray Asgard, but offer to betray those they are currently working for if Asgard offers them even more money.   Odin is offended: do they have no honor?  Well, they do, although they don't admit it, and spit on the concept of honor, at least as most people view that word.   They honor riches, they honor victory, and really nothing more than it takes to achieve these two goals.   They honor cunning and strength and everything that makes riches and victories possible.

At one point, Loki attempts to save them, giving them an out if they don't want to murder the babies in Asgard.   They cheer on, huzzah, huzzah, huzzah, we'll murder the evil in its sleep.   If killing sleeping children is what it takes for their precious victory, then they will not only kill sleeping  babies, they will do so with enthusiasm.   And a song in their heart. She mutters that he tried.

Never have I have seen angels quite so brutal, quite so delighted in killing and violence.   Maybe I just haven't read enough angel stories, but these?   These seem a special breed to me in their pure viciousness.

And may I say that adding Loki in here is quite nice?  I know gender-swapping is pretty canonical with him, but it's quite subversive of Marvel to keep that character trait of his, or at least add it into modern storytelling.   (I believe it was too subversive to use in the beginning, although given how old Marvel comics are, I can't really blame them.   I think it would have shocked almost all the sensibilities back then.)   It's also a nice nod to the fact that Serah is revealed as trans. Even better, this is flat out acknowledged.   By Odin.   Who doesn't blink his one remaining eye. And he loves all his children.

The story kept me interested, even thought I knew where Angela would end up and what happens to her, and who she was.   (You're pretty much told, too, right from the beginning.   The thing is knowing isn't as important as how the characters get there, and how they react.)   As you can, the art, for the most part, was gorgeous.   There were multiple artists, changing sometimes page by page, and I was more impressed with some than with others.

I read reviews, some of which found this a huge, distracting problem.  I mention this because I could see it happening, and I was disappointed enough in some of the artists that I knocked off a star.   For me, though, the story was good enough that the artist changes didn't bother me so much.

Another example of the gorgeous art, and a line that makes me laugh, although I suspect it wasn't intended to: