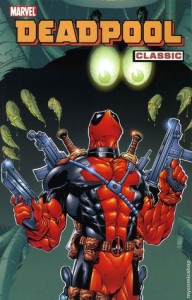 So I was listening to a panel yesterday and it got me thinking about this.  It was all about serial killers and delved into Stockholm Syndrome and how you can develop a psychosis if living with someone psychotic.   But the most important parts, the most relevant to this review, were the parts about Stockholm Syndrome.

As I mentioned before, there is a prisoner of Dadpool’s named Blind Al, or Alfred.   She’s this old, blind woman.   Why is she Deadpool’s prisoner?   No reason is ever given.   At first I thought this might be a joke, because they pull pranks on each other and banter, and actually seem - and are - concerned about each other.   But it’s not a joke.   He has her in a secret hideaway and even his best friend, Weasel, doesn’t know where Al is.   Not only that, when Weasel finds out, Al says Deadpool will kill them both if he finds out she’s had someone else over.

So he kidnapped her, and isolated her.   He controls her through fear.   If she makes a misstep he locks her inside the box.  Which, by the way, is a torture room that he goes into himself on occasion.   Al gets concerned when he goes into the box, by the way, which red flag.   When Deadpool finds Weasel in the Deadhut, he punches Weasel out and locks both of his ‘friends’ into the box.   (There are other things going on, which I will get into later.  I just need to get this out right now.)  Al explains that the door is open and Weasel can leave, but she refuses to.   Why not?   Because it’s more than a door that makes a prison.   It’s the time that she ran to a friend, and maybe more, that Deadpool didn’t know about.   Couldn’t have known about.    When she walked up to the door, she knew something was wrong because of the way that the dogs were whining.   Deadpool had killed her friend, and dragged her back.

Which only makes what happened before - and after - worse.   Deadpool is raped.   He’s drunk, first of all, too drunk to consent.    I sort of want to explain this before I go back to the Stockholm Syndrome. He had a fight with the woman he’s in love with, Siryn of X-Force.   He admits that he really, really needs her and is afraid of what’s happening to him.   She basically says she was being hunted, he wasn’t there, and that she believes he’s come to make trouble and she doesn’t have time for him.

He’s never lost it with Siryn like that, never yelled at her, tried to force her to do anything.  Or not since they’ve become friends.   He slapped her once, but it was kind of firefight type of thing, so she’d forgiven him, and they were committed to the friendship for a while.  So he gets drunk, and goes back to where they’d been fighting, which is when Typhoid Mary comes, using a holographic projection to make herself look like Siryn.   Siryn admits she was wrong, and needs him too, and they sleep together.   When he wakes up, Siryn is being an asshole, and then goes, oops, and shows herself to be Typhoid Mary.

And if you think she doesn’t know that she took advantage of him, you’re wrong. He goes home, and vomits. And then Al knows something is wrong and says that she’s concerned.   To which he answers this: Um, how exactly is she not Patty Hearst?   She was kidnapped, and kept there through fear.   She now plays the ‘try to escape’ game.   (I forget what their name for it, but it is a game.   Where she literally tries to escape from him.   They find this cute.   Most times.   Sometimes she gets tired of it, though, because he always manages to keep her there.   Yeah, that’s probably it…)

So when Deadpool goes off to fight T-Ray - Mary’s on-and-off paramour as well as Deadpool’s nemesis - Deadpool is off his game.   Majorly.   He decides he’s been a dick to his friends.   Um, one friend and prisoner/Stockholm Syndrome victim.   She starts calling him Master and doing laundry and shit.   Generally, she’s a hausfrau, even more so when he says he wants things to go back to the way thing were and to their pranks and all.  She’s going to be break him, she thinks.   She’s been doing it to people long before him!   And by Primus, she knows how!   By doing housework.

I… just have to words to explain how fucked up this is.   None.   Because keep in mind that Deadpool is a pretty classic abuser.   He asks her, at some point, why she makes him do this.

Yes, I'm sure it's the woman you kidnapped and whom you keep there via fear that's making you do this.   /sarcasm

Look, this shit gets dark, and there are some good things about this volume.   They didn’t treat a man getting raped with a brofist, which they could have.   They didn’t make it okay because Typhoid Mary has a sultry/psychotic personality.   Deadpool was deeply troubled, and was wrong after this.   I didn’t like that as soon as the issues with the fight with T-Ray, it went away - and from what people say, it’s never, ever referenced again except some vague, ‘oh, I have/had business with her’ comments.   But this could have been much more harmful; they could have blown this off.   They didn’t, and I respect this volume for that so, so much.   I wish Deadpool had talked to someone about it, breaking that silence of those who are victims of rape.   But he didn’t, and I just have to do without them blowing this issue off completely.

I like what they did with spinning him out of control completely and making him lose everything.

But Al, Primus, Al just went to a WTF place that I couldn’t connect with…