So, yeah, continuation of Deadpool origins... 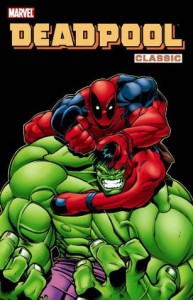 And I'm not really a fan.   It's just less interesting to me than what the later comics do, both in the meta/comment on narrative and the use of satire to skewer the current political and social world.   It feels less weighty, and without that, it's just Deadpool being a jackass and making witty one-liners.   Fun enough to keep me interesting, but nothing to write home about.

So I'll write to you guys here, instead.   I'm starting to realize how... unlikable Wade is when he's just a mercenary.   He treats his friends/prisoner - yeah, he's apparently keeping a blind old lady prisoner for some reason that wasn't really explained yet? - like shit.   Look, being mentally ill doesn't excuse being an asshole, but at least I can understand.   I can be like, 'oh, the chemicals in your brain are screwing you up.'

Plus, and I hate to say this, but later on Deadpool changes.   I don't know when or where, but he is just so much nastier earlier on.   And I have trouble feeling any sympathy for him at all because of this.

I do like what they're doing with Typhoid Mary, though.   They're setting up the scene when *spoilers*.   (No, I'm not giving it up, but I know it's coming, so this makes the original interaction between them even more perfect.)   It's dark, and about to get darker.   It doesn't quite feel like it's treading water, like a Deadpool book can - okay, get on with the constant one-liners, and have a hint of a plot, please type treading water - but it feels like it's moving slowly enough that I'm getting impatient for some of the things that will happen.

Still far from my favorite Deadpool.   I'm really not crazy about the art.   It's technically good, but the style is driving me bonkers.   (I say this type of thing a lot, but there's a lot of good artists who's style I just don't dig.)   I didn't down the stars for the art so much as the dissatisfaction with the writing and some narrative choices, and even the way the character himself is built at this point.