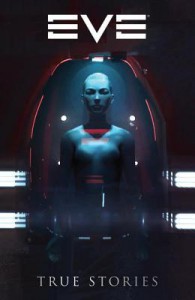 Maybe this would have made more sense if I knew anything about the game this was based on, but just as a story in itself?   It was confusing, it didn't really set the tone for me, and I got lost fairly quickly.   I kinda went along because there was enough corporate intrigue to keep me just-barely interested.

It was a relief when I was done.   However, the art was amazing, especially during the first half of this story.   There were intriguing ideas such as using a jump clone - a clone you make of yourself that you can 'jump' into - for said corporate espionage, and I wanted to see what would go on with that.   In the end?   That was worth it because that?  I didn't see that coming.

But for the most part?  If you're not an EVE fan, I wouldn't bother.  I certainly won't with anymore should they come along.  I'm hoping the next one will be more amusing for me.