Marvel's on a roll! 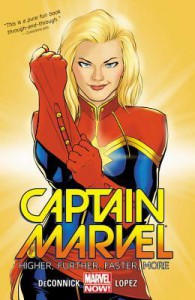 Despite the fact that Disney won't make a female superhero movie, Marvel itself is doing wonderfully right things with women.   The female love interest/secondary character in Silver Surfer was wonderful.   Considering that the Surfer has the potential to be a solo sausage fest, so there was no need for a secondary character, much less a female, it's wonderful that they included one who has about as much time and attention devoted to her.   The fact that I think she's an amazing character is even better.

Then there's Captain Marvel.   A book written by a woman, that stars, yes a female superhero.   One who is considered the best pilot out there, and whom Iron Man - and the Avengers - trust to go out and do Avenging-type-stuff in space for about a year.   (They said they needed someone who could stand the solitude.)   And while she has some guest stars like the Guardians of the Galaxy, she pretty much stands on her own.   Even when the others are in her book, it's hard to forget that it is, in fact, her book.   The storylines assimilate the other characters without a hitch, but the main storyline revolves around her. It's up to her to deal with the problems she faces, and while, yes, she gets helps, again, the focus is on her.   It's nice to see a lady superhero take center stage, and keep that spotlight on her.

Again, this would be enough.   But it's really not for Marvel.  Why would it be when they can give you a lady superhero who takes center stage, written by a wonderfully talented lady, and then illustrated gorgeously?   (By a man, yes, but he does her justice, and doesn't super sexualize her.   In that she keeps her clothes on, and her poses seem more natural than 'jutting hip out until it's dislocated while pushing out boobs until spine breaks' poses.)

This would also be enough, but I guess Marvel, and the writer, decided to give us more.   It's a fun, action packed story, there's a lot to be said about refugees, relocation, and finding a home once your home is gone.   There's a lot to be said about family and how you deicide if you leave people behind.   There are, in fact, other strong women, like the one who's the matriarch of the alien refugees, and there's the menacing J'son, the menacing patriarch.   It would seem very feminist and contrived, except that there's a long history of J'son being a dick to everyone, including his son, the Prince of Spartax, and also Star-Lord of the Guardians of the Galaxy.   And maybe, yes, there is something to be said for the matriarch, but it's also not quite original.   I haven't read the story arc yet, but when Odin takes a sabbatical, an Allmother takes his place.   There have been matriarchs in the Marvel universe before.   It's not so much contrived, but more that this has been convention in the Marvel universe, especially when dealing with alien species.

Looking forward to continuing.   Haven't decided if I'll buy the next three issues with my band-spanking new Marvel digital comics discount once I run out of the issues on the Unlimited, or wait to see if more come into the Unlimited service in the next couple of months...